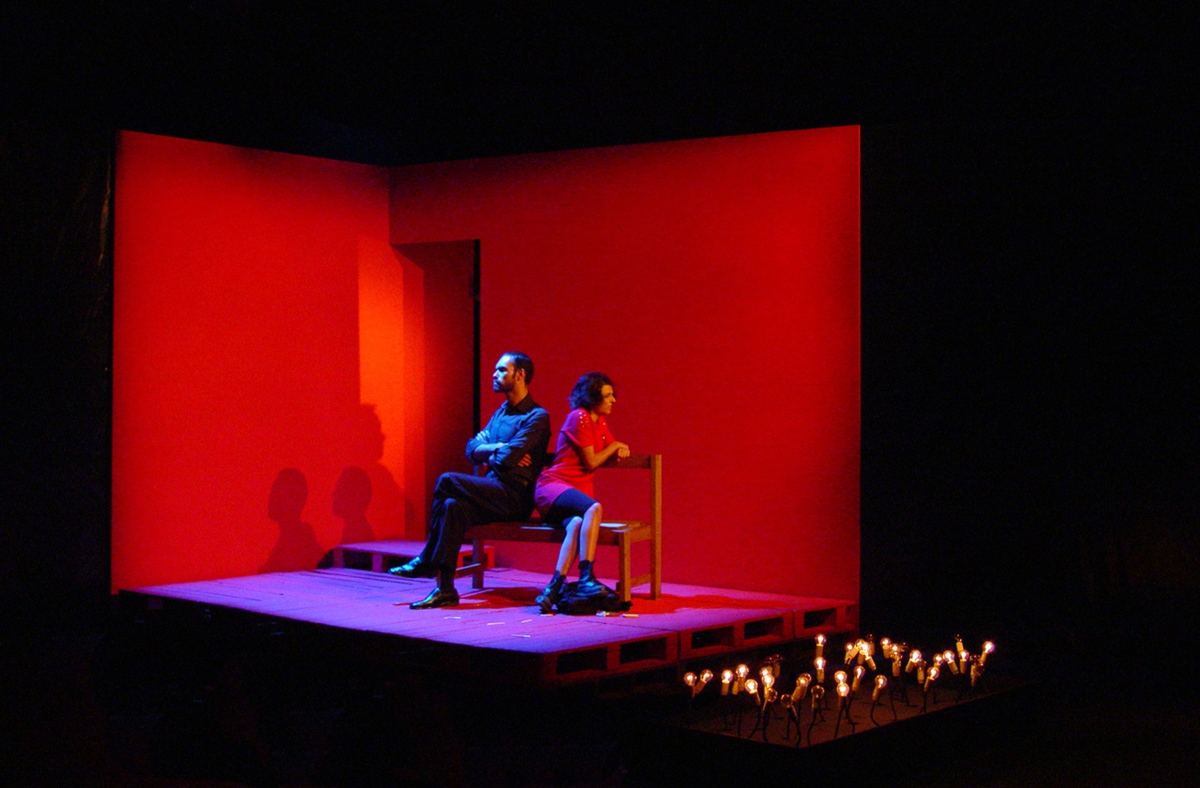 Cenography for “Mal Me Queres”

In Evora, the old barns of Epac gave rise to associations with cultural affirmation in the city. Group singing, music, dance and theatrical performance on an experimental basis. “A Bruxa teatro” occupies a space that was transformed to function as black box. A neutral space painted in black.

Location of “ A Bruxa teatro” in relation to the city of Evora.

The use of a theatre by a company with limited resources promotes a space with an “underground” atmosphere. This clandestinity reflects the choice of provocative texts and a closer relationship between actor and spectator.

“Mal Me Queres” by John Santos Lopes explores social confrontations and relationships of modern life in a web of secrets that one revealed throughout the play. The construction of the scenario suggests in an abstract form, two distinct spaces where the action occurs. The author of the text describes an alley in the city, a porch at the rear of a villa and a flowerbed of marigolds that takes in the scenery as the metronome of this theatrical performance. Schematic representation of the setting and relationship between the audience and the new proposed structure. Schematic section. The alley and porch.

The scenography focuses on two opposing areas in the set design, and are defined spatially by light and colour. The alley, while a metaphorical space is materialized through blue lighting and the use of a street lamp. The dramatic revelations in this space initiate the unfolding of the plot.

The porch, red in colour signifies the opposing idea represented by the alley. It is projected as a dynamic and constant space during the performance. Elevated from the ground, it looks to expose clearly the story that the play aims to tell. It is a place of tension. In the centre of the porch a wooden bench.

The flowerbed of marigolds acquires mystery; and reason for its existence is only revealed at the end of the plot. The marigolds are yellow light bulbs that vary in intensity and accentuate different tempos and dynamics of the piece. “Mal Me Queres” performance at “a Bruxa teatro”.

Within context of this scenario, the audience pays an integral part of the piece. A wooden structure covered in black plastic surrounds the audience, the alley and the porch. It proposes continuity and unity to the entire stage.